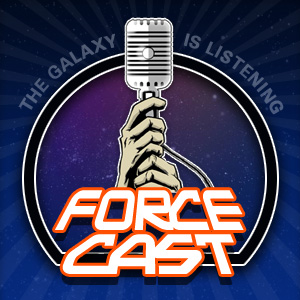 Curto and Burns are back again with more reports and analysis from New York's International Toy Fair! If you are a Star Wars collector, this is your Super Bowl! And the ForceCast: Collector's Edition is there to leave "No Fan Left Behind!"

Walk the halls of the Javits Convention Center with James and Dan as they check out all the cool collectibles destined for toy shelves throughout 2011 from that galaxy far, far away. Hear from Funko, Diamond Select Toys, showroom interviews with Julie Stern from LEGO, Alan Gordon from Comic Images, Shingo Nakagawa from Kotobukiya, Heidi Murphy from Uncle Milton, and Scott Seraydarian from Mimoco. Plus, meet brand-new licensees like Joe Amaro from Jazwares and Nelo Lucich from Skyrocket. All that and, believe it or not, a whole lot more!