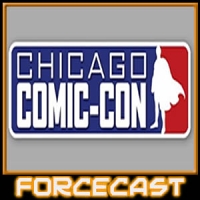 The Star Wars presence at the 2009 Chicago Comic Con was HUGE! Join Jimmy Mac as he braves the throngs to bring you interviews from the show floor with the talents behind some of the Saga's most indelible characters: Peter Mayhew (Chewbacca), Tom Kane (Yoda in Star Wars: Clone Wars), Howard Chaykin (illustrator of the original Star Wars film adaptation from Marvel), Jerome Blake (Mas Amedda and others), Maria De Aragon (Greedo), Anthony Forrest (Sandtrooper), and Doug Wangler (Quinlan Vos). Chicago Comic Con brought Star Wars fans from across the country to the Windy City and The ForceCast brings it to you, leaving NO FAN LEFT BEHIND with this special report!

Keep checking ForceCast.net for more reports from Chicago Comic Con 2009 and be sure to listen to our interview with Steve Sansweet from the event!

Updated:Check out Jimmy Mac's photos from Chicago Comic Con on our Flickr page.